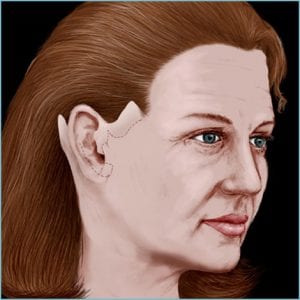 Our Colorado facelift specialists create natural-looking results because they carefully re-drape the skin after tightening the underlying SMAS and platysma tissues. The elevated skin overlaps the initial incision and the ear. They trim the overlapping skin where it overlaps the original incision, allowing them to use fine sutures to stitch the edges together without the tension that can cause the results to look too tight.

The removal of excess, overlapping skin using either the traditional or mini-facelift technique is similar. There is an important difference, however, that can create an unwanted bald spot. Because surgeons make the initial incision in a traditional facelift within the temporal hairline (above the sideburn), rather than at the temporal hairline (at the edge of the sideburn and non-hair bearing skin), the overlapping skin in this region includes the sideburn. This causes removal of hair in this region and elevation of the sideburn leaving a bald area where the sideburn belongs. During a mini-facelift, because our surgeons place the incision at the sideburn hairline, there’s no displacement of the hairline and no bald spot is created.