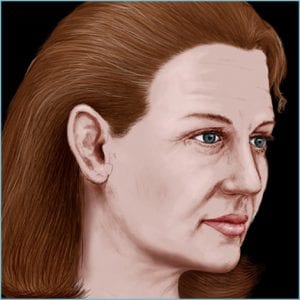 Once the surgeon trims the excess, he delicately places fine sutures to hold the patient’s two skin edges together. By precisely placing the sutures at the location where he made the original incision, the surgeons performing mini-facelift surgery at our Denver, Colorado practice minimize the appearance of the resulting scar.

The suture line and final scar location in a traditional facelift extend behind the ear into the hair and above the sideburn into the hair, as well. Patients who prefer wearing their hair short, or pulling back long hair, may have noticeable scars after a traditional facelift. The scar location above the sideburn within the temporal hair-bearing scalp can be visible when the head is wet. Of more concern is the upward movement of the sideburn and hairline caused by the removal of hair-bearing skin. This leaves a bald area where the sideburn would normally be, creating an aged and, in some cases, an unusual appearance. During the mini-facelift technique, the surgeon eliminates this problem entirely by placing the incision at the hairline.